I was born in the south of sweden 1981. I count myself as lucky growing up in the countryside. Sure, I love the city. The concrete jungle suits me just fine as long as I have the woods and the ocean not too far away. I guess this might be the reason I ended up in Sydney, Australia. It has the perfect mix.

The day I saw the world I already had a couple of siblings so there was always someone to play with. Not to talk about a few years later when the family extended to me, five younger brothers, two older brothers and then of course my older sister. It was enough kids at home to make our own junior soccer team. Trust me, the thought has struck my mind.

At an early age I was a cheeky little kid who as you can see showed a knack of being in the centre of attention. According to sport science there isn’t such thing as “talent” only learnt responses. As kids do what the parents do... I wonder who’s to blame. I guess I shouldn’t “blame” anyone... rather thank them for setting me up for life.

Even though I thought I was a musical genius I never was a very good singer nor musician. In hindsight I think this could have something to do with the impossible task of sitting still. I was rather out in the woods making tree houses, exploring or playing games. I am proud to say I even was a scout during a couple of years.

When most of my friends started to play the recorder and learn to read notes I succeeded to exchange those hours for some extra physical education. It was here my interest for health and fitness started. I had always loved playing sports with my friends and soccer was my first sport of choice. 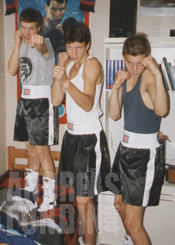 We moved from one village to another when I was 7 years of age. I had by then never joined a sport club but as most of the boys in my class played for the local soccer team Jämshögs IF I decided to give it a go. I played soccer most every day until the age of 14.

I played different sports and absorbed all the information I could from school. Somehow it seemed like health sciences stuck to my head so much better than math and definitely better than french.

At the age of 14 I started boxing. One of my good friends dad was an ex olympic boxer from Romania. We started a boxing club in the school gymnasium. Once again I was excited to find another great sport.

During this time I also got my first job within the fitness industry. My physical education teacher was one of the owners of the local gym and they needed new indoor cycle instructors. I leant how to teach and started teaching Reebok Cycling even though I did not know it was a paid job. I just thought it was pretty cool that I was the instructor. That the participants were all mainly young girls did also help.

Over the next few years I worked more and more. I continued boxing and also got an interest in weight lifting. I had decided already by then, that this was what I wanted to work with. I took a summer job and saved up for my first proper education. First to gym instructor then to a personal trainer at S.A.F.E, Scandinavian Academy of Fitness Education. My goal was set, to be the best personal trainer I possibly could be.

Once I finished college I took some time off and went backpacking in south east asia. It was here I first got in contact with modeling. I really did not think it was a job rather a cool experience and soon forgot all about it. It was a great time which made me realize there is more to the world than my little village in the south of Sweden. Once I came back home I set myself a new goal. To become a full time fitness professional. As Jämshög only has about 2000 cititzen I decided to move to Stockholm, the capital of Sweden.

My oldest brother was living outside Stockholm and I barricaded his living room for the next couple of months under which I succeeded to build up 30-35 hours split between 10 sessions of group fitness, gym instructions and personal training. I worked all over town for companies such as Sturebadet, E2, and Worldclass. Looking back at this time I realize how insane it was. I left home during early hours then spent all day on the train between my different sessions. I would most often come home late at night just to cook my food for the next days work. Eating, sleeping and training became my life.

Within a couple of years I had gone from a local group fitness instructor in a small village of Sweden to the capital Stockholm and was now on my way to Hamilton New Zealand to study at Waikato Institute of Technology.

The time in New Zealand was great. Even after finishing off my diploma I continued to study towards a Bachelor in Sport and Exercise Science. I also got in contact with modeling once more but still never persued it. I later went back to Stockholm to study another 6 months of anatomy and physiology at Stockholm University of Sports.

Over the last decade I had played a variety of sports. I love the feeling of learning new skills, to exercise and to have fun. The key to getting fit and staying fit is to have fun and challenge yourself.

Once I had finished my studies it was time to start thinking about where I wanted to work. I had been all over the world, and seen many places. I liked Sweden but it felt a bit too small and a lot too cold.

I had been over to Australia a couple of times and really liked what I saw. I decided to settle there. Initially I did not have the visa’s or the insurances needed for the personal training industry so I did a bunch of random jobs until all the paperwork was done and I could continue doing what I liked the most. Personal training.

I have lived in Sydney since 2003 and worked for a few different companies doing corporate health, and personal training. Finally I ended up at Golds Gym in Darlinghurst where I built up my business. When Golds shut the doors in 2008 it felt natural to move to the neighboring gym, City Gym also in Darlinghurst. This is where I still base myself and I must say I am very happy with the gym. It is a small private gym where everybody is friendly. It is personal... just like training should be.

So, how did I end up modeling? As I said before I got in contact with modeling for the first time during my travels in asia. Over the next few years I did a couple of small jobs around the world but never had an agent so when I got to Sydney I had a friend who thought I should see his agent, Chadwick Models which I did. I had to do a couple of castings and ended up getting my first job the week after. My first campaign with aussieBum came a couple of weeks later. After that I continued doing one or two jobs per week and I have now been working for Chadwick Models for three years.

I have had the pleasure of working internationally and also work with Sweden Models in Sweden, Nova Models in New Zealand and Model Team in Hamburg, Germany.

Over the last couple of years I have started thinking about combining my jobs within media  with my personal training. In 2007 I got my first job as a personal trainer for TV when I shot 4 episodes for Australia’s Next Top Model. It was a great experience and I felt I wanted to work more within TV. In 2008 I was asked to do a casting as a personal trainer for a show debuting on Channel 7. I was successful and I started shooting 10 years younger in 10 days which broadcasted in february 2009.

In the near future I see myself living the life I always dreamt of, the life I am living right now. I hope to have the opportunity to get involved within TV a bit more in the future. I believe that the world and particular Australia needs more education within health and fitness. TV is one of the most powerful mediums out there and I would be honoured to be a  part of making Australia and the world a better and healthier place to live.

Being a personal trainer is not just a job, it is who I am.